Sunderland AFC season card holders have yet to see their team lose a league game at the Stadium of Light this season, with Jack Ross’ men pushing for a return to The Championship at the first time of asking.

With the Lads nicely poised for the final run-in – and a trip to Wembley to look forward to - season card holders can now renew their seat for the 2019-20 campaign – and enjoy a price freeze.

Almost 24,000 supporters committed to a season card for the current season, a truly remarkable number and a clear demonstration of the loyalty and passion of Sunderland fans.

Following on from this, and with the Stadium of Light already offering some of the best value-for-money seats in football, all prices have been frozen at the 2018-19 rates. This means that supporters won’t pay any more for their seat in 2019-20 than they did this season* - providing they renew by 4pm, Monday 15 April.

Chairman Stewart Donald said: “When we all pull together, players, supporters and staff, then we’ve got something really powerful at this club.

We’re on a journey to re-build and reinvigorate Sunderland and our season card holders have been a huge part of that on-going process. To have almost 24,000 season card holders in League One is unprecedented and indeed something most Championship and many Premier League would be proud of.

“I would like to thank everyone for the faith they have shown us, for getting behind Jack and the team and for making this club what it is.”

New season card prices for 2019-20 will not be announced until the club’s divisional status is confirmed and anyone who is not an existing season card holder and wishes to purchase a season card will be placed on a waiting list until such time as prices are confirmed.

We know that paying for a season card can be challenging, so to assist supporters to renew their seat, our already popular Direct Debit payment scheme has been extended from four to FIVE payments. These payments are now spread over a ten-month period - between May 2019 and February 2020, which makes paying for your season card even easier.

Supporters who previously paid by Direct Debit will have their season card automatically renewed and don’t need to do anything to claim their seat for 2019-20. Renewal information (by post or email) will confirm the Direct Debit payment schedule and terms and conditions.

Supporters who don’t currently pay by Direct Debit can still take advantage of the scheme, which is free to join and there is no interest charged. Simply complete the Direct Debit form enclosed within the renewal pack at the same time as you renew your seat. The forms are also available online to download.

DEADLINE TO BUY AT FROZEN PRICES

The deadline to renew your current seat is 4pm, Monday 15 April. After this time your season card will be considered as lapsed and you are no longer eligible to buy a seat at the frozen prices.

Any purchase after this date would be termed as a new season card and charged at the new rate (which will be announced once our divisional status for 2019-20 is known). Your current seat would also be released for sale if it is not renewed by the April 15 deadline.

Supporters are asked to read their own renewal information carefully as it has been individually tailored for each season card holder. This information will be sent by email or post over the next few days.

Most importantly, supporters must be aware that there are two tiers of prices for 2019-20. Supporters who renewed or purchased their season card before July 20 2018 did so at a reduced price and, providing they renew by the April 15 deadline, they can once again do so at this price.

Supporters who purchased after July 20 will also pay the same as they did last season, enjoying a price freeze at the standard price they previously paid. Those who bought 18, 12 and 8 game season cards can also buy a full season card at the frozen standard price.

The two price tiers, which are valid until 4pm Monday 15 April 2019, are illustrated below or download here 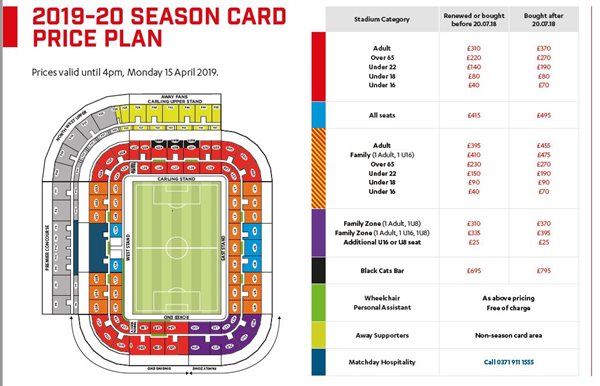 If you wish to move to a new seat, you must contact the ticket office by email, ticket.office@safc.com before renewing your seat. You must advise us before the deadline that you wish to move to a different seat and we will then facilitate all seat moves on Wednesday 17 and Thursday 18 April.

*should supporters choose to move seats to a more expensive area or move up age brackets then the prevailing price would apply, not their current one.