Sunderland AFC fans can continue to support their club with some of the cheapest prices in football on offer at the Stadium of Light next year. Young Black Cats fans aged under 16 can buy a season card for just £50 in 2017-18, over 60% cheaper than the same seat 15 years ago.

>> Click here for all the latest info on season cards

With this exceptional price equating to less than £3 a game, Sunderland is honouring a long-standing commitment to ensuring that its local community can continue to watch football at a price that is both realistic and affordable. In addition to this, a child’s season card in the popular Family Zone is available at the even cheaper price of £25 - just over £1 per game.

Black Cats fans have seen the cost of their seat at the Stadium of Light decrease significantly in recent years. Prices in 2017-18 will be substantially cheaper than they were over a decade ago and the realistic pricing structure proactively adopted by the club has seen Sunderland continue to enjoy some of the highest attendances in English football, with an average of almost 42,000 per game during the current season.

Young adults under the age of 22 will pay £170 for their seat next season and a fantastic value-for-money adult and junior package in the Family Zone is only £375. Further encouragement to its young supporters sees new concessions introduced in the Carling North Stand, meaning fans under 16 will save £300 on last season’s prices and those aged under 22 almost £200.

Adult season cards are available from £350 and supporters over the age of 65 will enjoy a special price of £250 for their seat for next seasons’ campaign.

Renewal information will be sent to supporters by email and/or post. The club kindly asks season card holders to look out for the information and to read it carefully when it arrives. There are a number of different renewal processes and individuals should check the individual information they receive as it will be personalised to their needs.

Sunderland AFC’s chief executive Martin Bain said: “Our local community gives us tremendous backing and committing to keeping our prices at an affordable level is just one of the ways we can show how much we value their support.

“It is key for us to be able to demonstrate that supporting Sunderland is something that is accessible to young fans. A parent or grandparent can bring a youngster to the Stadium of Light for £25 for the whole season, which we hope will encourage a whole new generation of supporters to develop a greater bond with Sunderland that will be invaluable in our desire to make the club stronger.”

Supporters can also pay for their season card over seven months, at no additional cost, making it even easier for fans to make the commitment to buying a season card.

Supporters have until 4pm on Friday 7th April to renew their seat. New season cards can also be bought during this period. 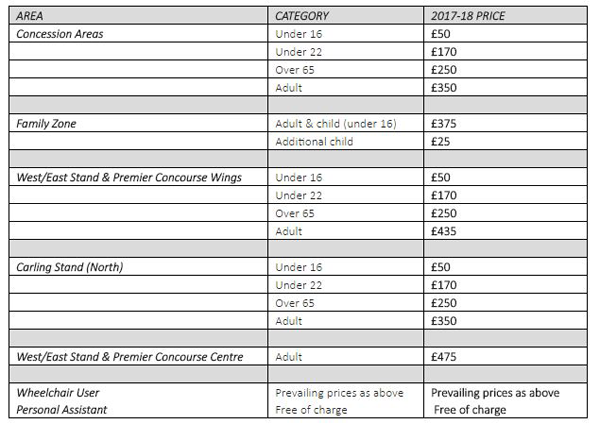