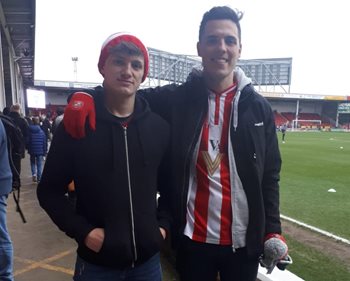 What inspired you to support Sunderland?

My Dad! He was a massive Charlie Hurley fan growing up as a kid and he had me kitted out in Sunderland gear as soon as I kicked a ball! I always say he had to pass the curse on to someone! I am glad I got it as my brother supports Liverpool which is the norm here in Ireland.

Have you watched Sunderland ‘til I die on Netflix and what did you think of it?

I binged through it in one sitting and I have to say I loved and hated it! It was a great production and was great to watch something about my own club. At the same time, it was hard to re-live all the trauma of last season! I cant wait for season two now which will hopefully show some silverware being lifted by George Honeyman!

What time are the Sunderland matches on in Dublin and do you watch them with any other supporters?

Same as in England, but unfortunately, it is hard to watch the 3PM games due to streaming rights. I usually watch the highlights on Quest and on the website the day after a game. When I can, I watch them with my Father or on my own considering supporting Sunderland in Dublin is a little bit out of the norm. Hopefully with this new branch, it will be different.

What was the first Sunderland match you ever watched? Can you remember the score?

My first game was February 2002 against Newcastle. We lost 1-0 but the only memory I have from that game is Shay Given’s outstanding save from Kevin Phillips. It looked a certain goal but somehow he got fingertips to the ball to put it over! That was under Peter Reid.

How long have you been supporting Sunderland for?

I am 24 and was 8 at my first game, so ever since then! They have been roller coaster years. I had season tickets for quite a few season which were great times and very important to me growing up. The club has become a massive part of my life and long may it continue. It just gets under your skin.

Roughly, how many Sunderland fans are there in Dublin now that you know of?

From going to matches, you see the same familiar faces in the airport, but personally, I know none other than my father. This is why I have set up this group and the response has been great so hopefully in a month’s time, that number will be different!

What are your plans for the Dublin branch?

My main hope is to provide a social outlet for all fans in Ireland to use. I would like to see this branch used for people to meet up, watch and go to games together. We have more fans over here than some people may believe and it is important that we have a sustainable supporters branch for the fans. I hope to organise a branch meeting soon with everyone who is interested just so we can get to know each other. I also hope to organise the first trip to a game with the Dublin Black Cats in April where I have ear marked the game against Portsmouth as a potential weekend away for the branch.

In addition to this, the ambitious part of me would like to interview past Irish players through talk ins (Elliott, Quinny, Kilbane, Breen or any of you guys get in touch!) and take it from there. Primarily however, a branch where men, women and children can all meet up together weekly/monthly with fellow fans is what I aim to do. I’m excited!